The Teeter-Totter Wall was installed in 2019 in the USA-Mexico borderlands in the city limits of El Paso, Las Cruses, and Ciudad Juárez, The project consisted of using the international border wall to balance pink see-saws across for people from both sides to play together. The area where the wall is located is not public, but mostly federal and private. The wall delineates a strong social- economic contrast between this area of the Mexican part and the US side. 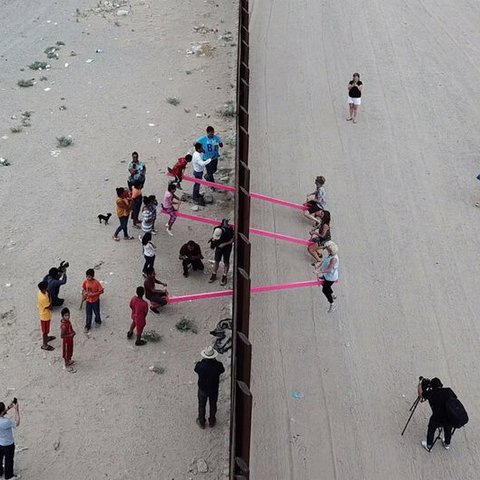 While the intervention did not have a direct impact on the policies it opposed, it portrayed a counter-narrative to the wall, and brought attention to other connected important issues such as family separation. It also promoted cross border solidarity, and reflected the interdependence of these communities.

Play can be an act of resistance
-Virginia San Fratello

Residents living close to the border, including those in peripheral areas. The project also considered external audiences at the national and international level as it was highly publicized to send a message of cross border solidarity.

On the Mexican side, most of the participants came from Anapra, a former unincorporated, precarious neighborhood next to the wall. It was mostly small children and families. On the US side, it was a smaller crowd with some families, and guests, as it’s farther away from residential areas. While participation did not involve a co-design of a physical structure, its collaborative characteristic was the ephemeral participation in the seesaw game otherwise it would not have been possible to carry out the project.

The intervention was socially interactive and political in nature bringing together children, adults, and families from both sides of the international border wall to play together.

It served as an ephemeral and experiential symbol to protest against the separation that the wall represents.

Although the project was only in place for less than an hour, it received worldwide attention. The Design Museum in London awarded the Teeter-Totter Wall the Beazley Design of the Year, one of the design world’s most prestigious prizes. The symbolic meaning of this project is undeniable, it shows that play can be an act of resistance. For the local community, it raised attention to close to home issues, and even if momentarily it reclaimed that border space for the local citizens.