The effects of climate change in the region of M'hamid El-Ghizlane, in southern Morocco, pose various problems that fuel the degradation processes of this space, whose fragilitý has been accentuated by the instability of climatic conditions. Therefore, in 2018, the association Sahara Roots with the help of the company Groasis was interested in Zagora more specifically, and decided to act with the help of young inhabitants of the village. 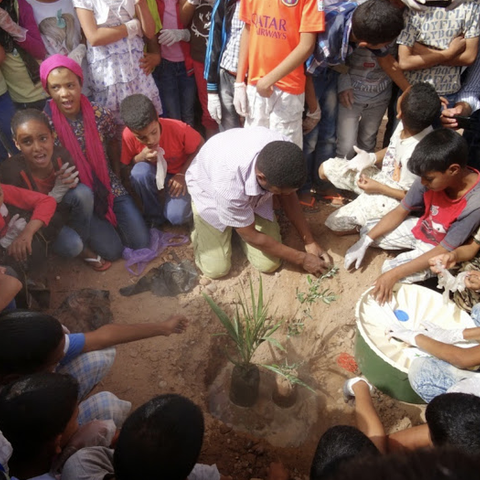 The project consisted of combating desertification through reforestation using an ecological water- efficient technology that was inexpensive and quick to install. With the help of numerous funding sources such as the Provincial Council of Zagora, the Provincial Ministry of Water and Forests, the Delegation of National Education, Dar America and the communities of Tagounite and M'hamid, they were able to plant a number of trees in a few days. Today, this project continues to be nurtured and spread to several regions of the Moroccan Sahara.

With the collaboration of a company that produces an ecological tree planting system, and the help of the local population and local students, a group of Dutch and Moroccan teachers has committed themselves to planting trees in different towns in the Sahara, notably in Zagora.

Planting trees with system produced by the company Groasis, which has implemented a technology that reduces water consumption

This project has been a real success with the citizens of Zagora and has made it possible to defend the ecology and to safeguard a biological heritage that was in danger of disappearing due to climate change. It has helped to raise awareness among the local population, especially among young people. The Sahara-Roots Foundation continues its journey across the desert to fight against the desertification of Morocco's towns and villages.