Due to massive urbanism in Senegal, mostly in Dakar, the capital, the numbers of cars, taxis and what they call “clando” (car sharing for long or short rides) has dramatically increased, creating a lot of traffic through the city. The Taxis and Clando have created their own routes, sometimes going through neighborhoods or parkings they are not allowed to cross, in order to be faster and make more rides. 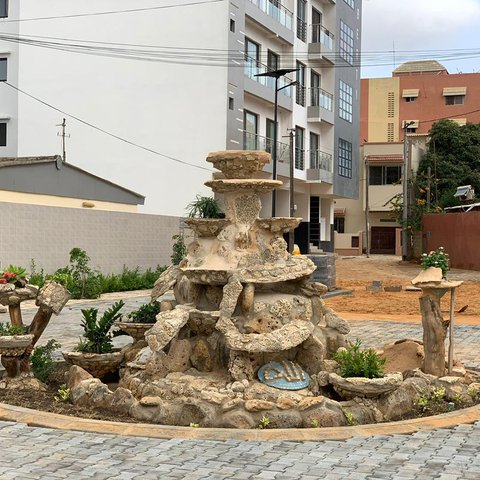 This is a public area. The young neighborhood's inhabitants who organized themselves as an association "Bët Sénégal", decided to make their area cleaner by making a "Set Setal" action that consist on cleaning the streets, planting trees and removing rubble. The area has been closed by rocks, they built a statue and a fountain, planted trees in order to make it prosper, protect their area, reduce the noise and make it safe for the children playing around. A young political party member saw the initiative and decided to help by providing slabs used by the young inhabitants to rebuild the area.

This project was initiated by the young inhabitants who were organized as a community organisation "Bët Sénégal" who wanted to do a "Set Setal" movement, quite famous in Senegal which consist on cleaning the neighborhood, removing rubble, planting trees and make the earea more sustainable. The inhabitants of the neighborhood participated, young and elder and make it at their own image.

As a result, in less than a month, Liberté VI inhabitants managed to close the areas with stones and solid rocks, to plant trees, blocking access to all cars, making it a safe place for the children to play and have a more sustainable place, created by and for the population, reinforcing the social link between the citizens.