Okuplaza San Diego is one of the first in a series of urban interventions that reclaims urban space for the people. After the closure of this street intersection due to construction, Ciudad Emergente, the initiator of this project, took advantage of the opportunity and used participatory strategies to recover this underutilized urban area and turned it into an active public space through tactical urbanism actions. 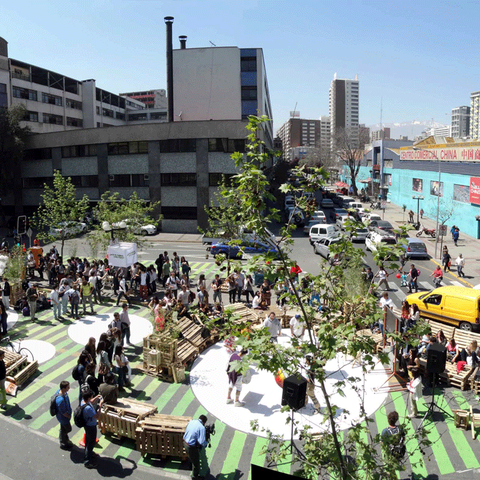 Through Okuplaza they wanted to trigger a debate about new ways of prioritizing street space in favor of pedestrians, cyclists and local neighborhood businesses. By turning this street into a park for the people to sit, enjoy and relax, they envisioned this short-term action to have long-term impacts on planning processes and the use of public spaces. The hope was also that this newly transformed space would stay after the testing month.

Ciudad Emergente is the initiator, owner and coordinator of this project. However, the requests of their projects come from the public, private sector, or others. They collaborated with:

Local residents, shop owners, pedestrians, cyclists and anyone who wanted to enjoy the space.

The initiator of the project was Ciudad Emergente, however the requests of their projects come from the public, private sector or others. The citizens of Santiago were actively involved in the co-design, mobilization and appropriation of Okuplaza and more than 300 university students helped to realize the project. Citizens also gave feedback through social media and where possible they immediately adjusted the park accordingly.

It served as a prototype for other similar urban interventions in the city. Not only did they replicate Okuplaza in other parts of the city, but also in other countries in Latin America and even in the United States. This placemaking intervention was unique in its use of the public space and helping the citizens reclaim their right to the city.

The short-term goal of people enjoying the space and boosting local businesses seems to have been achieved. The long-term goal was also at least partially achieved. Alejandro Plaza, Urban Area Director for the Santiago Municipality, said that it was a good initiative, but that they needed to improve communication both internally and externally as many people had no idea what was going on. It served as a prototype for future Okuplaza projects and they replicated the project throughout Santiago and (Latin) America. Whether urban planning processes have changed is hard to say. A negative externality was that people stole stuff from the park at night.