The objective of Map Kibera was to make Kibera visible in order to inform and orient local residents and to create an overview of Kibera to have a solid basis to claim public service infrastructure. By using low-tech and open-source tools, barriers of access to digital technology are reduced significantly.

The information on this project was compiled by students from the University of Geneva as part of the Urban Futures Workshop. (full report). 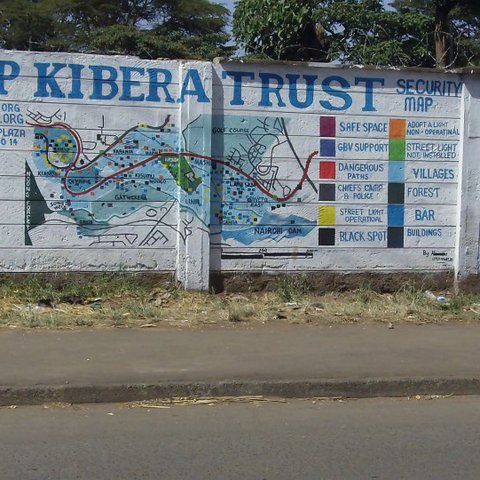 Kibera, the biggest slum and one of the most densely populated areas of Nairobi, was long a blank spot on official maps. In 2009, members of the OpenStreetMap (OSM) community started a participatory mapping project together with local young residents. Equipped with GPS devices, they walked around Kibera adding all important points of interest, thus producing only after three weeks a first map of the area. Then, thematic maps with an overview about education and health centres as well as water and sanitation stations were produced. Due to the success of the mapping, the project grew into a community information project including blogs, videos, SMS news and oriented mapping (election polls, security map, etc.).

Project is owned by the "Map Kibera Trust", an organization created by the mapping team

The Map Kibera project was initiated by two members of the OSM community who mobilized young local residents to co-produce maps of Kibera. Local residents were trained and became mapping experts. From the very beginning, the process was marked by collaboration, co-production and training.

Local residents are able to use GPS devices and to add and modify data on OpenStreetMap and other open-source platforms and programs. By doing so, they produce important information and become active in transforming Kibera. Access to digital technologies is democratized.
Due to the success of the mapping, the project grew into a community information project that still exists nowadays. Participatory mapping activities are replicated in other slums in Nairobi.