How did an old town neighborhood transformed their parking lot into a mixed-use space? 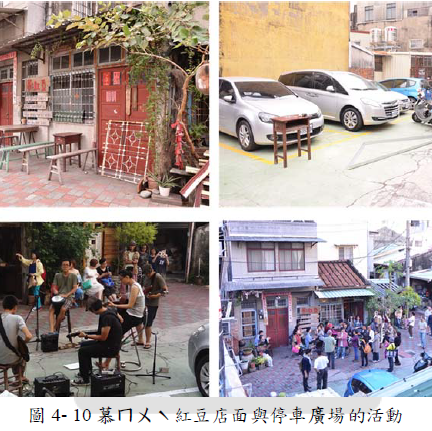 There is a parking plaza adjacent to the east section of Xinyi Street and Lane 148. It is private property. After a building got demolished, it became an empty space, so the landlord decided to provide this space (for rent) as a parking lot to the 39 store managers around the area to attract customers. Since this open space is located at the intersection of the street, it has become a node for people to come and go.

Additionally, the landlord and the neighbourhood community decided to not just use it as a parking space, but also to hold events and activities for interested people on the square. Customers of Xinyi Street cafes and tea shops in the western area often pass by the parking lot to visit the eastern part of Xinyi Street, as it inhabits several famous art museums and small photo studios that are popular among tourists.

Time life of the project: Achieved (spontaneous transformation between the parking lot and the activity space)

The stakeholders involved in the project include all residents of the neighborhood or students from the Tainan University of Science and Technology just a few blocks away.

The main targeted audience are the residents of the neighborhood, particularly the youth to provide them an activity space. Additionally, as the area remains popular among tourists, they are attracted to spend some time and money in the shops and cafes around the parking lot.

The project itself was entirely citizen-based, no authority was involved in any stage of the project. It could be considered a neighborhood project with 100% citizen participation.

This project was the first scientifically recorded project of its kind. Around the Tainan old town, other neighborhoods followed their example, not just to improve the community feeling, but also to profit from tourists attracted by such projects. 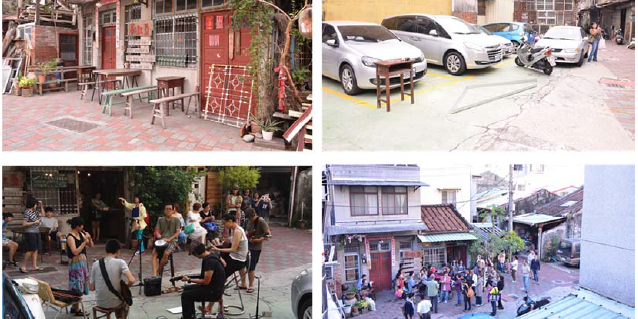 The project successfully revitalized the community life in the neighborhoods with frequent activities held in the parking lot, e.g. lectures hosted by the neighborhood youth organization about Qigong. On weekends, there were occasional pop-up music performances by young street artists. A monthly local vegetable market was organized or neighborhood youth organization meetings were all held in this parking lot/square at Xinyi Street.