Medellín has been facing high levels of pollution and constant replacement of green areas by gray infrastructure. The Green Virus seeks to increase green areas in the city of Medellín by building a series of “green parks” made up of vegetation, furniture with recycled materials and art. This project aims to improve the environmental conditions of the city and the quality of life of its inhabitants, guarantying spaces for recreation and to strengthen community ties. 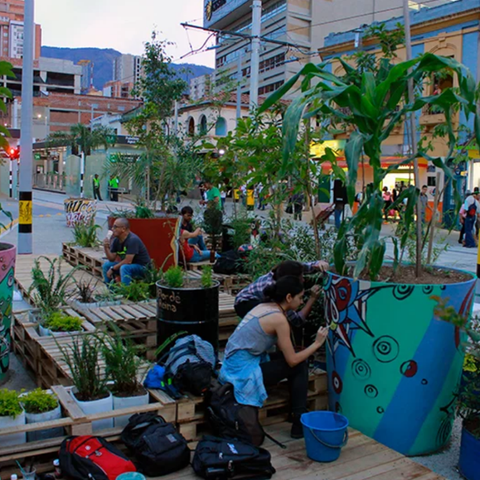 Implementation period: 2016 - present
Time life of the project: years
Achieved / on going: Ongoing, the first green park was implemented in 2016, it was followed by similar prototypes. Its idea is to spread the Green Virus throughout the city.
Cost: There is no information regarding the cost and financing of Green Virus, although it is mentioned that it has low budgets.
Status of land: Public
Type of place: Urban center and suburbs

Ciudad Creativa, which is an architecture and urban planning studio, is is at the origin of the Green Virus project. People of all ages and professions joined the project.

Each of the green parks involves different collaborations, including local private and public stakeholders, international stakeholders and civil society.

The project's green parks are for everyone, but some projects have a more specific target audience, such as the children’s playground in Niquitao.

This project was initiated by citizen’s collective creativity. When a street/space lacks green areas, Ciudad Creativa reaches out to find a community willing to work collaboratively to improve their neighborhood (“co-creation project”). Then, green parks are co-produced with the help of many neighbors and volunteers.

This project is a “green lung” for the city. Parks are based upon environmental research in such a way that it increases its environmental effectiveness.

The initial idea of increasing green areas throughout the city was achieved. People hope it will continue to transform other parts of the city for a greener and more humane city.
Green Virus is described as a highly successful project due to its appropriation by citizens. Both private and public entities regard it as an economical and intelligent way to revitalize Medellin’s spaces.