The Citizenship Week was initiated in 2018 by Nair Abakar, a young Chadian returning from his higher education studies in France. The objective of this tactical urbanism project was to mobilise the inhabitants of N'Djamena's neighbourhoods around the problem of unhealthy public spaces (insalubrity). During a one week event, citizens went in the streets of the city in order to clean them, manage waste and have a positive impact on the environment by planting trees. 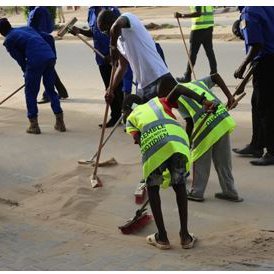 N’Djamena, the capital of Chad, is the country's largest city with its 1,2 millions inhabitants (Africapolis). N'Djamena has followed the evolution of sub- Saharan capitals. In fact, there has been a significant urban growth over the last 4 decades in parallel with the demographic explosion. But due to a lack of means and technical capacities, the public authorities have not been able to control this urban growth (Hemchi, 2015).

Implementation period : 7 days
Time life of the project : 1 week once a year
Achieved / on going : achieved but is replicated each year
Cost : N/A
Status of land : public
Type of place : streets

The project had a big success thanks to the large participation of citizens. Together they managed to clean up several areas of the city and collect waste. After this first edition, Nair Abakar created the association "Citoyens Sans Frontières" which was in charge of the next editions of the Citizenship Week. The focus of the second edition in 2019 was on road safety (see picture above) and, since gatherings were banned in 2020, the third edition's focus was on raising awareness about the Covid-19 pandemic.