Improving the quality of life of local people, regaining the feeling of ownership over their city and promoting a responsible use of public spaces to make a safer city. 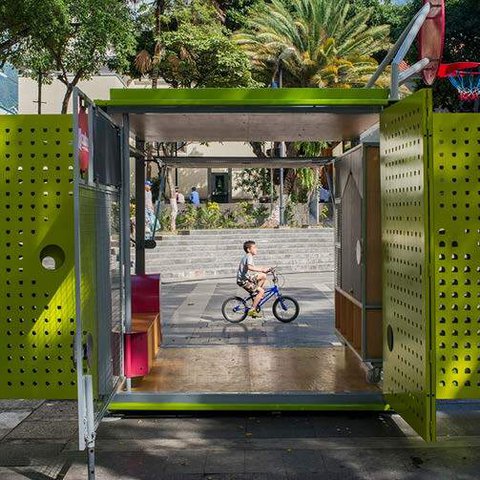 The Catalyst Cube is a reconfigurable social, cultural and educational space that acts as a focal point where different communities meet. It is an accessible intervention placed directly into the existing landscape. Its flexible design is a focal point for the community, a hub for conversation and play, and a way the neighborhood can take ownership of their environment.

Caracas is a city of contrasts, urban and rural, formal and informal, divided by physical and psychological barriers. Among the issues that currently affect the city is the decrease in public spaces for leisure and entertainment, risk of security and violence, compounded by its dense population and deficiency of services. Despite the difficulties, there is hope. By engaging with the city’s fabric the people of Caracas are beginning to make their mark.

Included citizens with emphasis on local families and children.

The project was controlled by the municipality, but had active participation of the local citizens and other stakeholders lasting throughout the entire development process of the Cube. Who was participating varied depending on which specific program was being offered. Overall, the main concept of the Catalyst Cube was participatory, with its design meant to connect people with their immediate environment, while its presence created an instant neighborhood focal point.

In life, there are three places that humans identify with: the home, the workplace and the third place. The Catalyst Cube sets out to be a third, and crucially green, place in the urban landscape. Furthermore, The Cube has ongoing potential to be a moveable and reusable asset for local councils, developers and organizations to adopt and utilize across multiple locations.